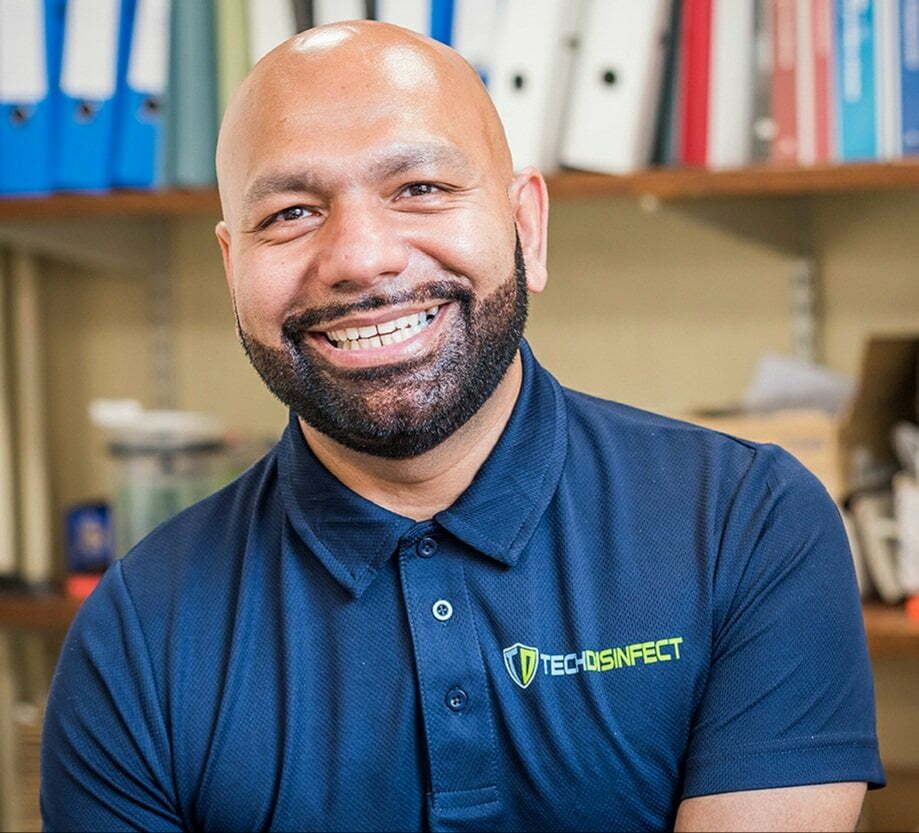 If you were told your work computer was infected, you might automatically assume it was by a virus of the digital variety. But have you ever stopped to wonder whether your laptop/workstation is ‘infected’ with the more traditional type of nasty?

Every trade has its tools. And if you’re an office-based business the humble workstation is yours, and as common a sight in any office as cutlery in a kitchen. But while cleaning the cutlery, or indeed the kitchen work surfaces, is an everyday occurrence for most, when was the last time you properly sanitised your workstation?

This did not escape Trafford man and FSB member, Karim Samani, who in 2018 was working in a stable, well-paid job as a financial controller for a large manufacturing business.  His work took him across the UK and Ireland, which meant he was often required to hot desk at random office sites – a practice that’s becoming increasingly common.

“On my travels, I would always notice workstations that I could use were absolutely filthy,” he says. “I don’t think most of them had ever been professionally disinfected or even cleaned, and it was quite obvious in some cases that they were unhealthy places to be for any length of time. Infectious bacteria, dust and food crumbs can cause long-term and short-term allergies, which I actually found I was getting.”

And thus the seed of a business idea formed in Karim’s mind in 2017, and Karim ditched his day job to take a punt on setting up his own specialised cleaning business to tackle the epidemic of dirty workstations, eventually launching in 2019 after much time spent on researching products that could be used to safely and effectively disinfect workstations and electronic devices.

“I always tell prospective clients the story about a car dealership who invited me to do the hygiene test on their workstations after they lost a £19,000 sale because a customer was so offended by the state of a desk she was asked to sit to do the paperwork,” he recounts. “She walked out the showroom in disgust after looking at the sales manager’s workstation, and while that was just 19k, she will have shared the story, and that’s reputational damage you can’t quantify.”

“Cleanliness isn’t just important for OCD people,” he adds. “We should all observe it for our own health and wellbeing, and frankly, that is at the heart of what I am doing – that’s helping businesses reduce their staff sickness costs, improving workforce wellbeing, and the overall working environment for their employees.”

“When I go in to see a client for the first time, I always explain that, and it gets their attention because they understand numbers and figures. The first practical thing I do though is a site survey, that involves swabbing a random number of workstations and everyday office devices. Typically about 85% of them fail, and that usually comes as a big shock to the boss who thinks their offices are nice and clean. They usually are on the surface, but it’s what you can’t see that causes the problems – and unfortunately, workstations are home to lots of nasties!”

And that perhaps won’t be a shock to many office workers these days, many of whom will spend a good chunk of their working day sitting at their desks, glugging drinks, coughing, sneezing, blowing noses, grabbing snacks, possibly the odd lunch – and probably all sorts of other things, too.

Sound familiar? It should come as no surprise then that your average workstation shares a similar number of bacterial nasties as a typical toilet seat, the difference is the toilet probably gets cleaned more regularly.

Continues Karim: “It takes me 20 minutes to do a full deep clean on each workstation, and that’s not just the keyboard, that’s the screen, telephone, mouse, the tower unit or docking station, and the desk itself, and we do it all on-site, do not unplug any devices and don’t interrupt your business operation. The main thing though is the keyboard – you’d be amazed at what comes out of them. I’ve actually found live maggots before!”

He adds: “Some people might see this as a bit of a luxury, but I dispute that. In fact, the feedback I’ve had from customers is that their staff actually quite like it that their employer is looking after them, and it does slot nicely in to the health and wellbeing agenda, and I love being able to help deliver that.”

The business at the moment is operated by Karim and his business partner, but they have big plans to have teams of specialised cleaners working right across Great Manchester, and ultimately would like to look at franchising with their own range of cleaning products. “The business really lends itself to a franchise,” he says, “and that’s certainly something of an aim for us.” 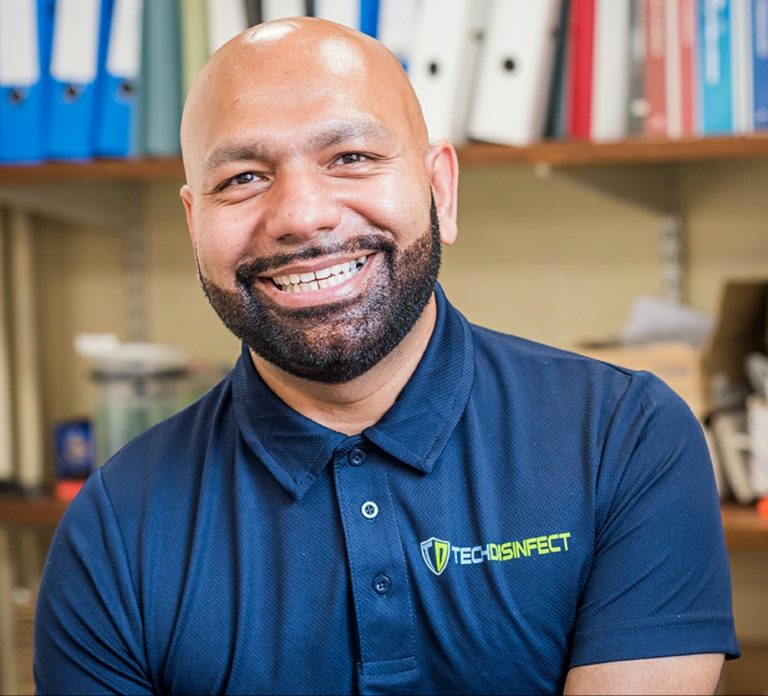 If you were told your work computer was infected, you might automatically assume it was by a virus of the digital variety. But have you

TechDisinfect are a specialised computer cleaning services company. Our aim is to protect everyone's wellbeing through our unique services.

Would you pay over £250k for a single human hair? Well someone has…
A renowned car dealership lost £30k due to a filthy workstation, very unusual.

You can find out more about which cookies we are using or switch them off in settings.

This website uses cookies so that we can provide you with the best user experience possible. Cookie information is stored in your browser and performs functions such as recognising you when you return to our website and helping our team to understand which sections of the website you find most interesting and useful.

Strictly Necessary Cookie should be enabled at all times so that we can save your preferences for cookie settings.

If you disable this cookie, we will not be able to save your preferences. This means that every time you visit this website you will need to enable or disable cookies again.